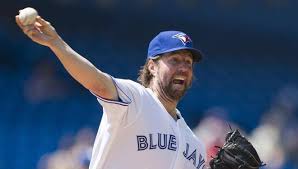 Exactly, R.A. Whatever face you’re making while throwing this pitch in some random game that did not take place today conveniently describes your start today to a tee. You had a rough start against yet another team with less guys I’ve heard of than songs in Arcade Fire’s song catalog (find: zero).

In his three losses this season, the trends have not been promising. He’s averaged just under FIVE walks per game, he’s allowed MORE THAN FIVE runs per game, and has struck out exactly four batters in each losing start.

On the other hand, it’s not as though he’s allowed a tonne of hits, and he’s only been homered off of twice in his four starts – and both of those came in the same game, albeit against another joke of a team, the Houston Astros.

Now, I don’t want to sound like an apologist, and I’m aware of how tiresome it became last year to hear pundits state that “it’s early”… let’s face it: it IS early!

In his Cy Young year of 2012, Dickey allowed eight earned runs on eight hits in 4.1 innings in his third start of the season, and had allowed six home runs by this point (the four start threshold) that year. By this point last year, he’d allowed far more hits.

The point is, he hasn’t quite settled into a groove yet, and I believe that the three-week mark of the season is a little early to be jumping on the alarmist bandwagon. I know this is Toronto, but “R.A. DICKEY IS A FRAUD!!!!” is a little strong, don’t you think, Sid Seixeiro?

I know, the excuses are getting tiresome, and last season was depressing as hell, and you should expect more from your ace, but… holy shit, people, it’s April!

Alright, I need something to cheer me up.

“I see myself as a starter. I don’t think that’s any secret. I want to be a starter in the major leagues. That’s that.”

What’s that, J.A.? Couldn’t hear you over your 4.60 career ERA as an A.L. starter, or your garbage spring, or your selfish inability to keep your mouth shut.

As if there isn’t enough forced negativity around the team already (Rogers budget cuts, Santana nonsense, Lawrie batting average, too many catchers, too many bullpen arms, etc), now we’ve got a guy who’s lucky to have a major league spot whining that he doesn’t have a spot waiting for him in the suddenly crowded Blue Jays rotation.

Lighten up, everybody. No, they’re not tearing it up, and there are certainly a few frightening trends to start the season, relating to injuries, a lack of patience at the plate, and some seemingly curious managerial decisions by Johnny Gibbers.

Having said that, here’s their lineup for this evening:

Dustin McGowan had a crappy first start and a heart-warming last one. Of all the sins Mr. Dickey has made this season in my mind, it’s messing with McGowan’s rhythm so that he can pitch in more favourable conditions that he can ultimately failed in anyway.

One would hope that he takes better advantage of a young, inexperienced lineup that even the most obsessive baseball fan would have to rack their brain to think of who the heck Chris Herrmann is. (See: the natural catcher that’s starting in right field tonight. Apparently their manager thinks he’s Ryan Doumit).

I’ll be watching for the most part tonight, so be sure to follow my hopefully not-too-kneejerk reactions to the live action.

For Jays Balk, this is @TheAsherRoth.