Right field is where tears begin to form. Cito has been talking not only of starting Jose Bautista in right field, but he wants him to lead off. Ouch. Jose showed flashes last year – not of brilliance, but of mediocrity at best. Okay, so he hit a bunch of home runs at the end of last season when the season was long over. If there’s one thing I’ll give him, he has a half-decent eye for the strike zone, but that doesn’t translate well when he comes up in the ninth, two out, bases loaded, and takes strike three. I can’t express the sheer number of headaches Cito gave me last year when he would keep Jose in the lineup in the most crucial times of the game. Why? Because he doesn’t believe in pinch-hitting? *Sigh*.

Oh, do go on, cocky, controversial me back on February 19, 2010, in an epic attempt to make predictions on who should be starting at each position. Hey, at least I seemed to realize that he had a decent eye at the plate…

Regardless, there are many names I’d rather have out there. Joey Gathright is realistically the guy I’d like to see start in right. He’s arguably one of the fastest guys in the league, he plays solid D, and most importantly, he’s NOT Jose Bautista. He also bats left, and I like my leadoff men to be lefties. Let Jose start against left-handed pitching – that’s all the playing time a guy like him should be getting.

Oh, Joey Gathright over Joey Bats, eh? He of the .631 career OPS, ONE career home run and one single plate appearance at the major league level played after I wrote that piece?

Bunting in the promo picture always inspires confidence in a player.

With that in mind, here are five more. And while they may not all happen as I call them, I can’t conceivably swing and miss that poorly again, can I?

They’re ranked on a scale of 5 (so obvious it’s borderline rhetorical) to 1 (so bold, I’m the second coming of Ms Cleo).

Overly optimist? Maybe. But this is a contract season for Joey Bats, and the last time he was playing for a new contract was the afore-mentioned 2010 season.

I know he’s six years older now, and that he hasn’t hit 50 since then, but the protection behind him is stronger than ever, and with the excessive amounts of cash he desires on the line, I don’t see him doing something stupid like blowing out his arm trying to toss a guy out at first base.

He had four home runs in the nine games leading up to that lapse in judgement last season, then had 3 homers in the 31 games that he wasn’t healthy enough to play the outfield, followed by 33 homers in 108 regular season games after that.

4. J.A. Happ will finish with more wins than Marco Estrada

Before you laugh, keep in mind that wins do not come close to being the only stat that determines one pitcher is better than another. Josh Towers won 13 games, while allowing 237 hits in 208 innings in 2005.

Anyway, Happ is a better pitcher than you think he is, or probably remember him being. And for good reason – his career has teased with bouts of supreme competency (12-4, 2.93 ERA in 2009, 1.85 ERA in 11 starts with Pirates last season) littered with inefficient performances stuffed with full counts and 5th inning yanks.

I’m rooting hard for Marco Estrada to repeat his performance of a year ago (134 hits allowed in 181 innings), but I know that his 13 wins were six more than his previous high in seven years prior.

But hey, this prediction could come true even if it’s Happ’s 17 wins squeaking past Estrada’s 16. Dreaming big is fun. 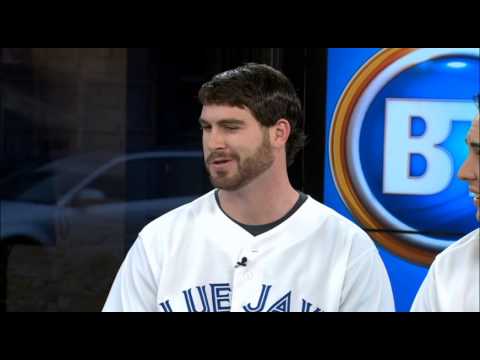 Don’t laugh, Drew, it could happen!

If Aaron Sanchez is going to be subjected to an innings limit and is sent to the bullpen by the time the playoffs(?!) rolls around, someone will need to jump into the rotation.

Sure, it could be one of Gavin Floyd, Jesse Chavez, or even Cliff Lee, but why not go with the home-grown product that’s going to be chomping at the bit to prove his doubters wrong?

I believe he’s a couple tweaks  in his windup away from finding consistency in his command, and the minor leagues are the perfect place to work on dramatic changes to one’s mechanics.

I’m not going so far as to say he’ll be in the top three and start an ALDS game, but remember what happened last year when R.A. Dickey started in the playoffs?

I’m playing it safe here with that wording, since it will be tough for Sanchy to have more wins or strikeouts if he’s in the bullpen at some point.

So out-pitch in what sense? I think Stroman will still be the de-facto ace by season’s end, but I believe Sanchez will pitch so well in his time as a starting pitcher that he will pass Stroman on the depth chart within the next two seasons.

Whether it’s with more electric stuff that gets more strikeouts, or he winds up with more innings or a lower ERA, I believe Sanchez will be valued more before long, and dare I even say, will start on opening day in 2018?

Of course, seeing what Stroman did today makes me reluctant to follow through with this one. That kid seems to be the real deal…

If you had a whole year taken away from you by a sprinkler head, you’d be pretty pissed off and want to prove your doubters wrong, wouldn’t you?

Plus, let’s not forget this is a contract year for Saunders as well.

He hit 19 back in 2012, and he did that at Safeco Field, which is a notoriously pitcher-friendly park.

Accompanied by the mandatory copout “as long as he stays healthy” prefix, I could see Saunders go to town at the Dome. If he continues to be protected by Russell Martin in this bottomless lineup, he could conceivably become the best Canadian Blue Jays slugger since Matt Stairs graced the ballpark on Bremner Blvd.

I leave you all with my unfortunate line about third base in that 2010 monstrosity:

At third base, we have the unfortunate job of choosing between Edwin Encarnacion and an oversized pylon. I know who I would choose – I’ll give you a clue, it’s large, orange, and isn’t alive. But I bet it would strike out less.

To be fair, two more mediocre seasons preceded Edwin’s emergence as the consistently epic slugger that he is today……