TWIJ (This Week in JaysBalk)

The difference between a 6-3 road trip and a 5-4 road trip: un Loup sans garou.

With the exception of the Clevelands, who have not only gone the Rod Beck route of the closer with the handlebar ‘stache, but the Canadian route as well.

Back to last night, though: a year or two ago, who was the guy that you’d ideally want batting with the bases loaded and two away trailing by two in the ninth? 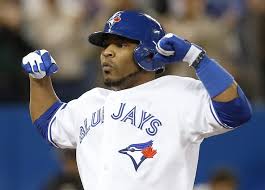 There we go. It’s hard to argue Edwin Encarnacion hasn’t looked like himself this year. 5 RBI in 74 AB just isn’t good enough from your clean-up hitter. And while RBI certainly doesn’t tell the whole story, there is simply more to be expected from that spot in the order.

Having said that, he hit .297 on the road trip with 11 hits – hitting safely in all but two games (one of those being yesterday, unfortunately) – and all five of those RBI came during those nine games away from the Dome.

So he’s coming around. Let’s hope that Jose Reyes’ magical influence starts to heat up the bats of Colby and the Brettuation – because that could be a very productive lineup with all hands on deck.

Before we take a look at the week ahead, I want to touch on one topic surrounding the recent changes to the roster.

Why was Mune Kawasaki sent down?

Now, I’ll admit that I did not happen to see a tonne of games last September, and that entering this season, I had no idea what Ryan Goins looked like.

I’ve heard about Goins’ hot start last year, albeit at a time of year where a lot of pitchers are at the end of their rope, while teams are trying different things (like Ryan Goins).

But from what I’ve seen of him this season, he simply does not look comfortable at the plate. Seven hits, three walks in 48 AB.

Yes, he has a better batting average than Brett Lawrie, but with 12 less RBI.

Send him down to improve his hitting craft, and let Kawasaki, who seems perfectly comfortable at the plate, while maybe being a slight downgrade defensively, hold the fort at second against right handed pitching.

A little guy with an over-sized bat – the image I see whenever Ryan Goins comes to the plate.

Hey look, a guy with a higher ERA than Dickey!

Nah, I like this match-up for reasons other than one arbitrary stat. Against a right-hander with middling stuff, the bats should be fine.

And really, how long can the Dickster tolerate this kind of mediocrity?

On the surface, it’s the Orioles’ ace vs the Jays’ technical #5 starter.

It’s also a rematch of the first game of the road trip, in which Tillman 3-hit the Jays, but was out-duelled by McGowan in his  best start of the season in a 2-0 victory.

Proof that it’s possible, just like anything is, really.

Hutch looked fantastic against the Clevelands, and he shut out the O’s in a game the Jays lost in extra innings.

Let’s be honest: the Jays could, and honestly, should get the sweep in this series. Can they pull it off?

First series of the year against annoying John Farrell and the defending champs.

Vegas picked the Jays last year, and while you’ll hear that a million times from Jays apologists this year, it goes to show you that anything can happen over the course of 162 games.

Who would you rather get in a trade even now? Jose Reyes or Shane Victorino? Mark Buehrle or Ryan Dempster?

The Sox stayed healthy and their key players performed. It’s not because they’re that much of a better team.

The pitching match-ups aren’t out yet, but Mark Buehrle will open the series with his 0.64 ERA and all. Can the bats help out?