Google is such a glorious thing. Just like R.A. Dickey’s knuckleball when it’s doing what he wants it to do.

Of course, R.A. didn’t throw a knuckleball when he wore that uniform. He was merely a bright-eyed youngster who wound up getting screwed out of about 90% of the contract he was initially offered after the Rangers found out he was born without an ulnar-collateral ligament.

That was one of many hardships that drove him to keep pushing and do whatever it took to become one of the best.

The Jays, of course, are full of guys who’ve had to go through struggles and defy the odds to get to where they are today.

Richard Griffin of the Star wrote last night about how Jose Bautista still carries a bit of a chip on his shoulder for the way the Pirates ushered him out the door in 2008.

After being a starter for the previous three seasons, his playing time was cut in ’08 and he was sent to AAA about a week before he was acquired by the Jays.

“After having been here roughly five years, to send me down and get optioned three weeks before the roster expanded was borderline a low-blow,”

This series is Jose’s first series in Pittsburgh since that trade. He had two hits last night. Hopefully his hunger for revenge acts as a catalyst for some offensive explosions over the next couple of games.

Dickey has a 5.09 ERA in six starts this season, but his last couple have been far more encouraging. In a victory and a no-decision, he struck out 12 and walked three (all three in one start) over 12 innings, allowing only four runs. He should be solid.

This season he’s 0-3 over six starts but, as usual, wins and losses don’t come close to telling the whole story.

His three no-decisions were all Pirates victories. In his first start of the season, he fanned ten over six innings allowing 0 runs. In his last start, a 6-1 victory, he was pulled after 2 innings because he was battling a nose bleed.

In his three losses, his offence has provided him with a grand total of three runs.

In other words, he’s pretty good. Don’t let his record fool you.

And now, a couple of quick news nuggets:

GUESS WHO’S HEADING BACK TO THE DL 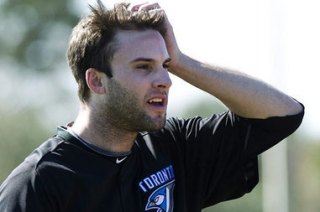 In a news flash that should shock nobody that has followed the Jays for a while, Brandon Morrow is headed back to the Disabled List with a right index finger sprain.

This could explain his allowing 11 hits over just 5 innings last night. Or, maybe not. Haven’t heard specifics yet.

But Sportsnet informs me this is his 5th trip on the DL since joining the Blue Jays. Fun!

I guess that puts a stop to the six-man rotation plan for now, as J.A. Happ is joining the rotation anyway.

But this is an unfortunate blow to the concept of moving Dustin McGowan back to the bullpen.

So I guess it’s good news for McGowan and Happ. Bad news for those who firmly believe this season rides on Morrow pitching even half as well as the guy we all expect him to be.

So THAT’S what he looked like as a shortstop!

After blowing the save in dramatic fashion last night for his third of the season, Sergio Santos has been relieved of his duties as closer for the second time in three seasons.

No matter who they use, they will act as a stopgap until Casey Janssen returns from his injury.

Also, be sure to check out DiNic’s piece on his ideal vision for a healthy Jays roster. Don’t let this preview bury his feature!